Spilled coffee, logged water after a car wash, and other spillages could trigger a foul smell inside your car. But, some drivers have complained that they perceive a burning oil scent after an oil change.

This shouldn’t be taken lightly because it is apparently due to oil leaks, which, of course, is a crucial issue. So, one of the reasons why a car smells like burning oil after oil change is due to oil leaks in the car engine bay.

But before concluding that the scent is from your car, you should first check your surrounding for oil pollution. Also, check to see if something is burning close by – this check is important if you’re close to a company that refines/sells/produces oil and gas products.

Why Car Smells Like Burning Oil After Oil Change

Basically, the only possible reason to perceive burning oil scent is due to leaky oil hoses in the engine bay. Oil passes through channels to get to the various components in a car’s engine bay.

However, since you only got to perceive the burning smell after an oil change, there’s the possibility that one or more components were not properly closed; probably, the filter wasn’t properly re-installed, or the drain plug wasn’t tightened.

The burning smell may also be caused by the little droplets of oil that must have dropped on your engine’s surface while the mechanic was carrying out the oil change process. So, when the car runs and the engine heats up, the oil begins to burn and release the scent you’re perceiving.

Regardless of these scenarios, your car smells like burning oil after oil change because oil has touched on metal in the engine bay. Another possible reason for the smell is when you’re close to an oil and gas production company that’s burning off oil for one reason or another.

We’d advise that you do not take this lightly. Burning oil can possibly lead to other critical damages, and whatever damages in the engine bay would definitely cost you a chunk of money – that’s if the main engine isn’t (badly) affected.

Your engine needs oil to stay healthy and work as expected; however, it doesn’t need oil to drop on its surface.

What To Do When Your Car Smells Like Burning Oil 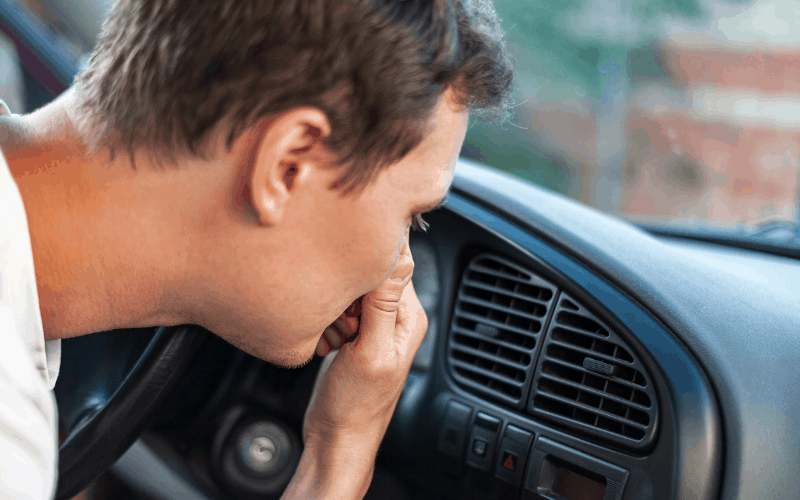 There are quick solutions to solve this issue; however, it points down to the cause of the burning. The solution for oil burn due to leakage is different from the solution needed due to oil overfill or spillage.

We’d explain the possible solutions to this issue with simple guidelines.

How To Stop Burning Oil Smell After Oil Change

If caused by oil spillage

It is possible that oil droplets may spill or fall on metallic surfaces when oil is being refilled. In such a case, the burning scent will stop when the oil has burnt off completely.

You could choose to stop the car, wait for the engine to cool down, then open the bonnet and clean the spillage or droplets.

When the mechanic refills oil to the brinks, it can cause oil spillage, which could, in turn, cause a burning smell while you drive. Understanding that this can be the reason for the situation, you should stop the car and check the oil level using the dipstick.

If the oil is above the recommended level, you should drain it out and refill it to a moderate level. However, if a mechanic did the oil change, you can drive back to have home moderate the level.

Apparently, when the hosts and channels that transmit oil through the engine bay is leaky, oil will drop from the leaking spots when flowing. This can cause the issue you’re facing, and you should look out for the leaks.

It can be difficult for you to fish out oil leakage spots; thus, you should have a mechanic handle the situation. Ensure that the leaky hose is changed completely.

Hopefully, you now know why car smells like burning oil after oil change. The smell is due to oil coming in direct contact with a metallic surface in the engine bay, and it’s burning off due to high temperature/heat.

If you do not take care of the situation, it could skyrocket to more expensive repairs. We’d advise that you act proactively when the tackled issue has to do with any component in your engine bay.

Furthermore, you should frequently change the oil filter to avoid damaging your engine due to containments that flow along with oil.